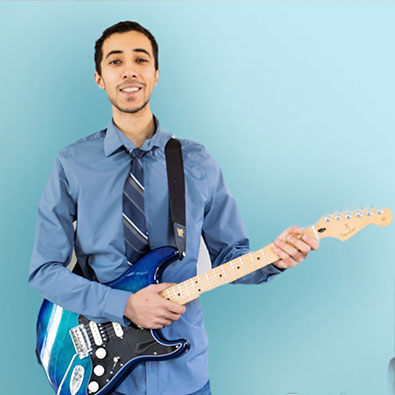 Aba’s musical journey first began in Elementary School. From Clarinet to Piano and Electric Guitar, Aba has been playing music since 8 years old. Playing in concert band, marching band, and Jazz Band allowed Aba to successfully learn various types of orchestrations quickly, perform in various venues throughout California, and gain the ability to improv play. Aba was one of few students chosen from the Coachella Valley to play clarinet in a full orchestra at Riverside Community College during his time at Palm Desert Charter Middle School. This allowed Aba to experience what an audition process takes and how important preparation is for musical performances. Aba graduated from Boston College with degrees in Political Science, Film, and Music. During Aba’s time at college, he became well versed in the arts by being a part of a sketch comedy club, creating short films, and learning the art of Audio Recording and Production. He loves playing rock, blues, hip-hop, and Pop on electric guitar and piano along with creating beats. Aba is very passionate about the arts and hopes to inspire others.